I was horrified to see the news of the beheading of the statue of the Virgin Mary at Our Lady of Lebanon Church in Toronto this past weekend. Acts of vandalism like this seek to intimidate and cancel public religious practice, and are emboldened by a broader sense of impunity for those who attack statues or monuments of any kind.
Politicians, the media, and all of us must speak out when acts of vandalism like this target the Christian community or any other community. Unfortunately, the response is often muted when the Christian community is the target. New Conservative leader Erin O’Toole was quick to speak out about this, but other leaders have responded more slowly or not at all. Although the numbers are not as high for the Christian community as for some other communities, Christians are clearly still victims of hate-motivated crimes here in Canada. In the current political climate, those numbers are likely to increase.
The attack on a statue of Sir John A MacDonald in Montreal, also this past weekend, is in many ways very different than the attack on the statue of the Virgin Mary in Toronto. But in both cases, we see how people think their ideology justifies them to take the law into their own hands. This is a very dangerous trend. Sir John A MacDonald was Canada’s first Prime Minister, and we remember him because of his enduring impact on our lives. If it wasn’t for him, Canada might not exist as a country at all.
Immigrants have come to Canada from all over the world, in large part because we are a rule of law country with a well-functioning peaceful pluralism. When we disagree, we resolve our differences through debate, not through violence. Unfortunately, the values of rule of law and peaceful pluralism are under threat by those who believe they can respond to perceived injustices through violence. Such people suggest that they “can not wait” for legal processes to run their course and must take the law into their own hands to advance what they believe to be just and right. But in the process, they unleash a dangerous lawlessness and chaos which leads to further violence and injustice.
Hopefully we will be able to find out who was responsible for the attack on Our Lady of Lebanon Church, and what their particular motivations were. But it is clear in any event that they were acting in a climate where more and more people seem to think it is okay to commit acts of vandalism based on their ideology.
Our politicians must have the courage to oppose these attacks and stand up for Canadian values such as peaceful pluralism and the rule of law. Without a strong response, this lawlessness will continue. 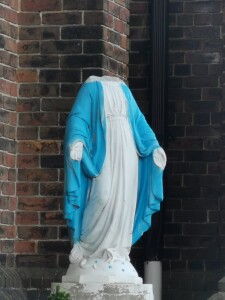