Nesrin Essa writes: Music is the moon light in the gloomy night of life 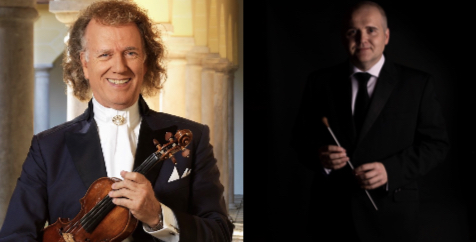 In the middle of the pandemic, wildfires and floods comes music that brings us tears of joy. Watching Andre Rieu or Steven lloyed with their respective Orchestras, and the beautiful music they play proves to me that there is much more to enjoy in life!!

Andre Rieu is a Dutch violinist, well-known for creating the waltz-playing Johann Strauss Orchestra. The orchestra has turned classical, and waltz music into a worldwide concert touring act that is as successful as some of the biggest global pop and rock music acts. It creates a great soul stringing music that the audience could never forget. By December of 2008, Rieu had achieved his 100th platinum accreditation in Australia, and by May 2011, he had sold over $50 million dollars’ worth of his CDs and become the highest selling music artist in the country’s market between 2006 and 2011.What makes Andre Rieu’s performance so spellbinding is that it is so simple. The slowness and the beauty just capture your soul. Andre is one of the most loved musicians, he simply inhabits it with boundless joy.

Steven Lloyed Gonzalez graduated from the Royal Birmingham Conservatoire with distinction . Steven has performed, recorded and taught in some of the world’s most prestigious venues. Since then, he has been invited to work with world renowned orchestras such as the London Philharmonic Orchestra and the Scottish Ensemble. In 2001, Steven became Resident Conductor of the Royal Oman Symphony Orchestra, a post he held for two years before becoming the youngest ever Principal Conductor of Cairo Symphony Orchestra. He has conducted several recordings with the London Philharmonic Orchestra. He was also featured as the conductor on the original soundtracks of a number of films such as; ‘Avant L’oubli’ and ‘Vipere Au Poing’. His amazing analysis of the score, players and sound being produced, in addition to his warmth and smile, elegance as well as distinguished mannerisms make Steven Lloyed one of the great conductors of today. Now Steven is recording the 6th & 9th Symphonies of Shostakovich with the BBC National Orchestra of Wales in Cardiff .Many of his fans including myself can’t wait to hear the work of the Maestro with his orchestra and all other collaborators who make the world a slightly happier place.

I couldn’t agree more with The great late Jean Paul who once said that “music is the moon light in the gloomy night of life “.It is comforting to know that while there is hatred, chaos and sadness in the world there are also people like Steven Lloyed and Andre Rieu who spread happiness, joy and love through their work.